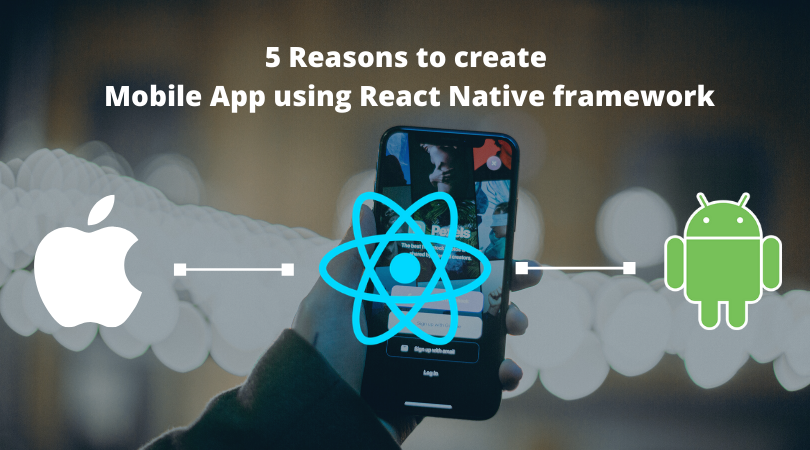 Today is the era of technology and most of the users need immediate information and thus many businesses are moving towards creating their own mobile app to boost their business. Currently there are many frameworks being used to create mobile app development and React Native is one of them.

What is React Native

React Native is a hybrid mobile-app development framework for iOS and Android. It is been developed by Facebook to create mobile apps with one common language, in short developer just need to write a single code and it will work for both platform: iOS and Android.

Currently React Native is been considered as an ideal solutions for small and big enterprise who wish to build app for their own business, thus for internal and commercial projects also with the assistance of Reach Native platform, its easy to add and create new modules within the app which would be compatible for both platforms. Furthermore, interaction of those apps would be similar to the apps build with Native app development.

Below are listed 5 reasons, why one should build app with React Native.

2. Cost Effective Solution for start-ups.
Today many start-up businesses are willing to create their own mobile app but budget is always been main factor which leads step back from their idea for creating an app. Thus, over here React Native platform comes in existence for app development. Development time is always less comparing to Native App development and thus it will lead to cost effective solutions for clients. In short if there is a tight budget then a cross-platform mobile app is the right approach

3. Fast loading time – Hot Reloading
React Native always wish to give best developer as well as user experience, thus React Native introduce Hot Reloading scenario for developers. Thus, instead or recompiling one can now reload the app instantly as Hot Reloading only reloads the file you just edited, not the entire file.

4 Highly deduction in App Development time
For Native app, development time is an important factor as both apps are build on two different environment and thus development process takes more time compare to the app built with React Native platform. As aware app is coded natively for Native app development. Currently Swift is used for iOS and Java for Android whereas with React Native there is no need to develop two different code as single source code will work for both platform, only some minor changes are required to make it platform specific which will lead to save hugh amount for development time.

5 High amounts of libraries.
There is plenty of libraries available which greatly facilitate mobile development. React Native has an impressive list of libraries which will lead to smooth app development and will  bring high speed, responsiveness and best user experience within hybrid development, thus will provide your users with a great native app experience.